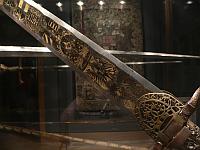 The result of writing Book of Mormon history from back to front, I think, resembles a cross between The Mission and Last of the Mohicans.

Before we set off down the rabbit hole, let me emphasize that this particular exercise is probably only useful in rare cases. I’m about to conjure away some basic elements of the Book of Mormon, which for some people are non-negotiable foundations of the text, and my reasons for doing so may not seem terribly compelling. I’m intentionally taking a reasonable approach and stretching it to an unreasonable length. Others might decide it would be simpler to declare the Book of Mormon to be inspired fiction and be done with it.

But maybe you’ve read the Book of Mormon and your gut tells you that it contains an element not only of truth, but also of historical reality, and “Joseph Smith made it all up” is simply not working as an explanation for its origin. You’ve also read a bit of ancient history, and you’re aware that what your average stele, clay tablet, papyrus scrap, or golden plate claims can be very different from what historians now believe actually happened. The basic idea here is to look at the Book of Mormon as a pre-modern record that shares the same difficulties as other documents, and start building our model of Nephite history on the parts that seem (according to our best gut feeling) to be historical, rather than on the types of writing that in other contexts would be treated as myth or legend. As I mentioned earlier, there are reasons to be wary of 1 Nephi and 3 Nephi 11 as establishing the historical timeline, for example.

So where’s the end point that we can start with? For me, the end point is the plates, the golden plates, the Plates of Joseph. I can’t read the accounts from the 1820s without concluding that Joseph Smith had something heavy and metallic that bore writing of some kind. Where did he get the plates, and how did he know what was on them? The simplest answer seems to be that Joseph Smith, just as he claimed, obtained the plates from Moroni, who told him what they contained. (This brings up another question, but we’ll get to that in a moment.)

So we start reading the Book of Mormon. After we strip out the Nephi novel and the Isaiah chapters and the Golden Age of Fourth Nephi and the legendary world of the Jaredites, the Book of Mormon offers a good 150 years or so of historical chronicle, roughly from the reign of Benjamin up through the last Nephite judges, as well as the military career of Mormon. If you accept the Book of Mormon as a text based on history, this is the part that needs explanation. Irruptions of the sacred into historical records are all but universal and ask only for belief or disbelief, but history demands a context.

The historical kernel of the Book of Mormon that needs a time and place in the Western Hemisphere, it seems to me, is this: Over the course of a little more or less than two centuries, one literate group of New World inhabitants was formed out of diverse elements, adopted a new religion, interacted and struggled with their neighbors, and was finally overwhelmed and obliterated by them, all in such a way that some individuals found a particular resonance in their history with the Christian message.

What other clues do we have about the Nephites, looking at them from the end rather than the beginning? A quick and superficial answer would include that their records were associated with other metal artifacts (a sword, breastplate, and ball of curious workmanship). The text talks about horses and steel and heliocentrism. The text goes into great detail concerning Nephite religion, a form of Christianity. Religious and technological history suggests that the simplest (but certainly not the only) solution to Book of Mormon historicity places the Nephites in the centuries following Columbus.

One way to create something like the Book of Mormon is not to transport a boat full of pre-Exilic Jews to the New World where they turn into Indians, but rather to transport a particular story to the New World, where people adopt it as their own and transform it in a new environment. In this account, Nephi is just an eponymous ancestor, but it’s imperative that the Brass Plates make their way from Jerusalem to the Promised Land, where they are turned from base metal into gold.

So in this analysis, the historical puzzle of the Book of Mormon is not to discover a Semitic people in Ancient America, but rather a group of Colonial-era Native Americans who were Christianized and then destroyed by their rivals, such that their last survivor, or a descendant of their last survivor, was able to convey their records and stories into the hands of Joseph Smith. If we loosen the chronological constraints on Book of Mormon history, the question of historicity reduces to two matters of biography: Who was Mormon, the last general and historian of an eradicated people, and who was his son Moroni, who watched over the transmission of the records to Joseph Smith and the young prophet’s education? Considering what we know of missionary efforts and mortality among Native Americans following Columbus, there should be many places to start looking.

I’m not entirely satisfied with this solution to Book of Mormon history. I don’t like the idea of Moroni being mythologized from a wandering record keeper into an angel. On the other hand, I like how this approach narrows the gap between divergent ways of thinking about the Book of Mormon, between the literal/orthodox “records led to a translation” and the figurative/skeptical “parallels inspired fiction.” I like the idea of expanding the places where we search for spiritual ancestors beyond a few strands of the magisterial Reformation. And I think that questioning assumptions about the historical timeline is important, as textual analysis of the Book of Mormon, for example in distinguishing “Nephite” sections from Joseph Smith’s possible expansions, too readily takes the 600 BC- 421 AD timeline at face value. The real test, of course, is which approach to Book of Mormon history, if any, will ultimately allow the identification of the Nephites with historical or archeological material. It would be a shame to dismiss an inscription that said “This way to Zarahemla” because it came from an inconvenient century.